Puella Magia Madoka Magica is a modern classic — the mystery of what magical girls are, the picture book animation of the witches by Gekidan Inu Curry, the thrilling soundtrack by Yuki Kaijura. And of course, there are the vivid characters and how we see them bloom and wither as They struggle to find themselves. There & # 039; s Homura's determination and Kyouko's feistiness but what about Madoka herself? When I think of Madoka, I recall her world-shattering wish at the end, but not much else over the course of the series. This is strange for a series protagonist who is usually one of the most dynamic figures in a story. So why is Madoka so much less memorable? After all, aren't main characters supposed to be active? In honor of Madoka ’s recent birthday, it & # 039; s worth celebrating the fact that there & # 039; s more than meets the eye to this somewhat unconventional main character. 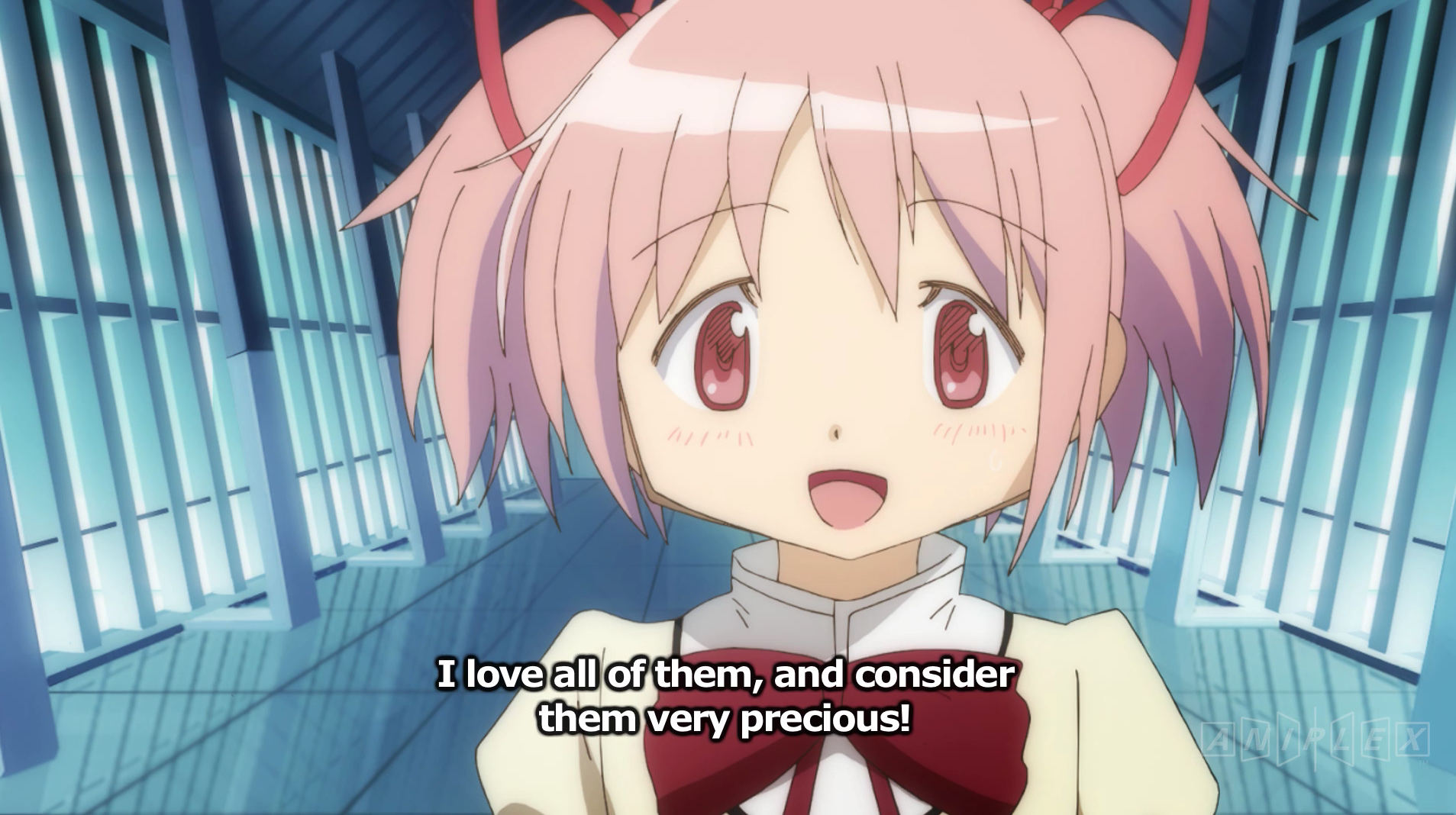 Madoka starts out having no concept of the world of magical girls, and in the main timeline, does not become one until the end. She can't participate in the flashy fights against the witches, and she doesn & # 039; t understand the struggle of what it means to be a magical girl. The majority of the story is Homura trying to prevent her transformation — so she can't partake in the gorgeously stylized battles against the witches.

Instead, Madoka & # 039; s struggle comes from within. She has no idea who she is or what she wants. After all, what would someone who has stability in life wish for? While she doesn't have any exceptional talents, she lives a comfortable, average life. Her home life is good, she has a nice relationship with her family, she is passing school, she has solid friends. Unlike Mami and Kyouko, she hasn't experienced any personal struggles, and unlike Sayaka, she isn't close to someone who is greatly suffering. Madoka doesn't have any struggles that instantly come to mind. But we do learn something about her that reveals a very key part of her personality: she doesn & # 039; t like herself very much. 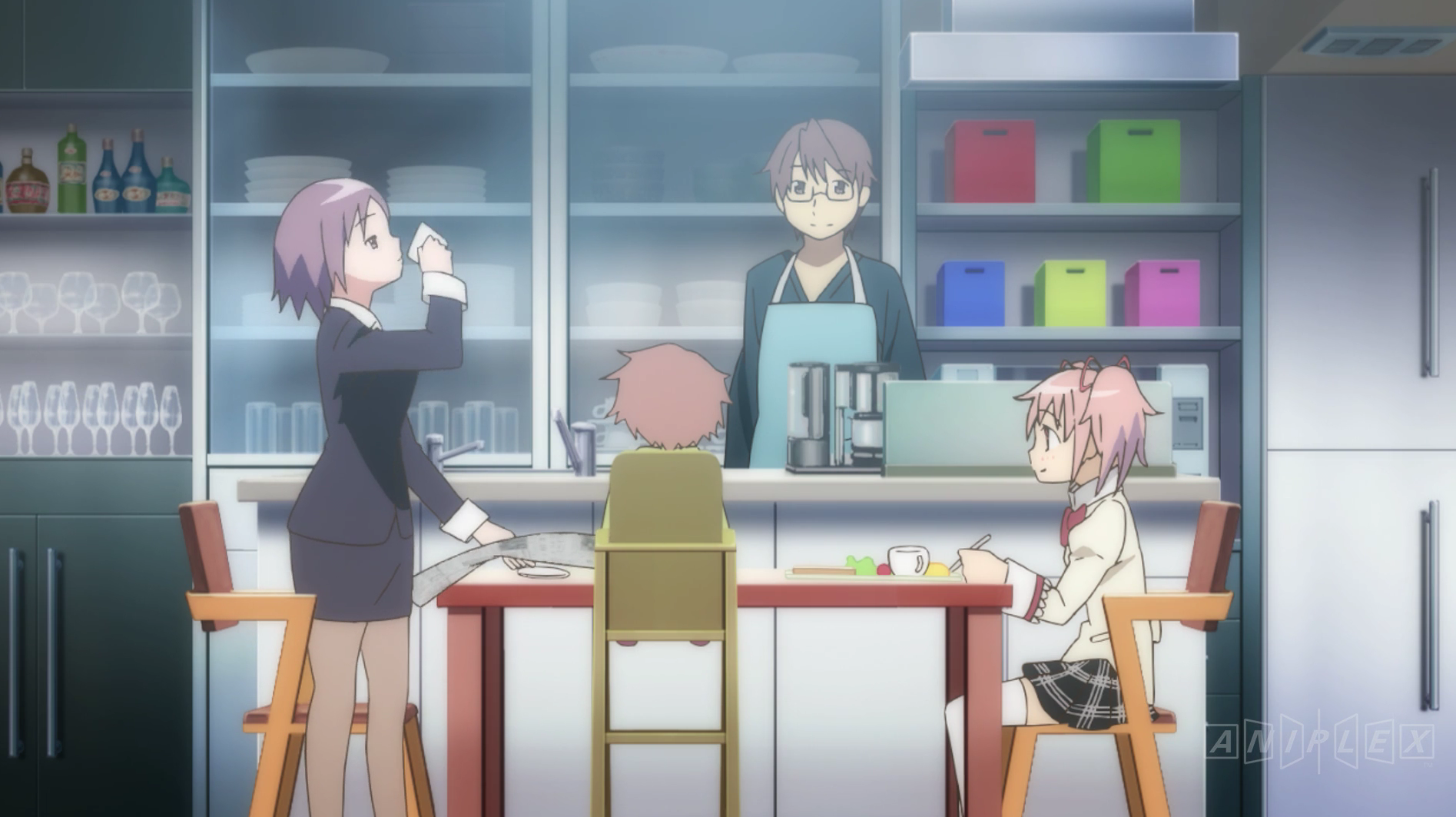 Despite her calm and peaceful life, Madoka do n’t have a very high opinion of herself. While she is n & # 039; t failing any of her classes, she do n’t excel In school. She also doesn't believe she has any particular talents that make her stand out. What Madoka doesn & # 039; t realize is that she has an incredible sense of kindness that sets her apart from others. Unlike many other protagonists, like Sakura of Cardcaptor Sakura or Usagi of Sailor MoonAnd yet, the story continues to turn, revolving, Madoka does not have a firm concept of who she is. She has very low self-worth, being hard on herself for being unable to help out even when the situation is beyond her ability. Around the choices of others while Madoka is stands still. She berates herself for being passive, for being a coward, all because she isn & # 039; t in a position to help others the way her friends can. In order to make up for her low sense of self, she instead hyperextends herself while trying to be the ultimate support — which as Homura points out, has its downsides. Madoka always ends up turning herself into a martyr.

Despite any damage it might cause to her, Madoka & # 039; s selflessness drives her actions through the series. She tries to protect Kyubey for no other reason than that he & # 039; s in danger. She continues to try to reason with Homura, Even when the other girls consider her a lost cause. More than anything else, Madoka wants to do what she thinks is right. The downside of such empathy is that when Madoka does have the power to help, as seen in the worlds Homura resets, She is willing to die to defeat Walpurgis, she is even able to kill if it means that a situation will be defused. Madoka has this instinct, for better or for worse, but no power to act on it — At least, not until the very end. 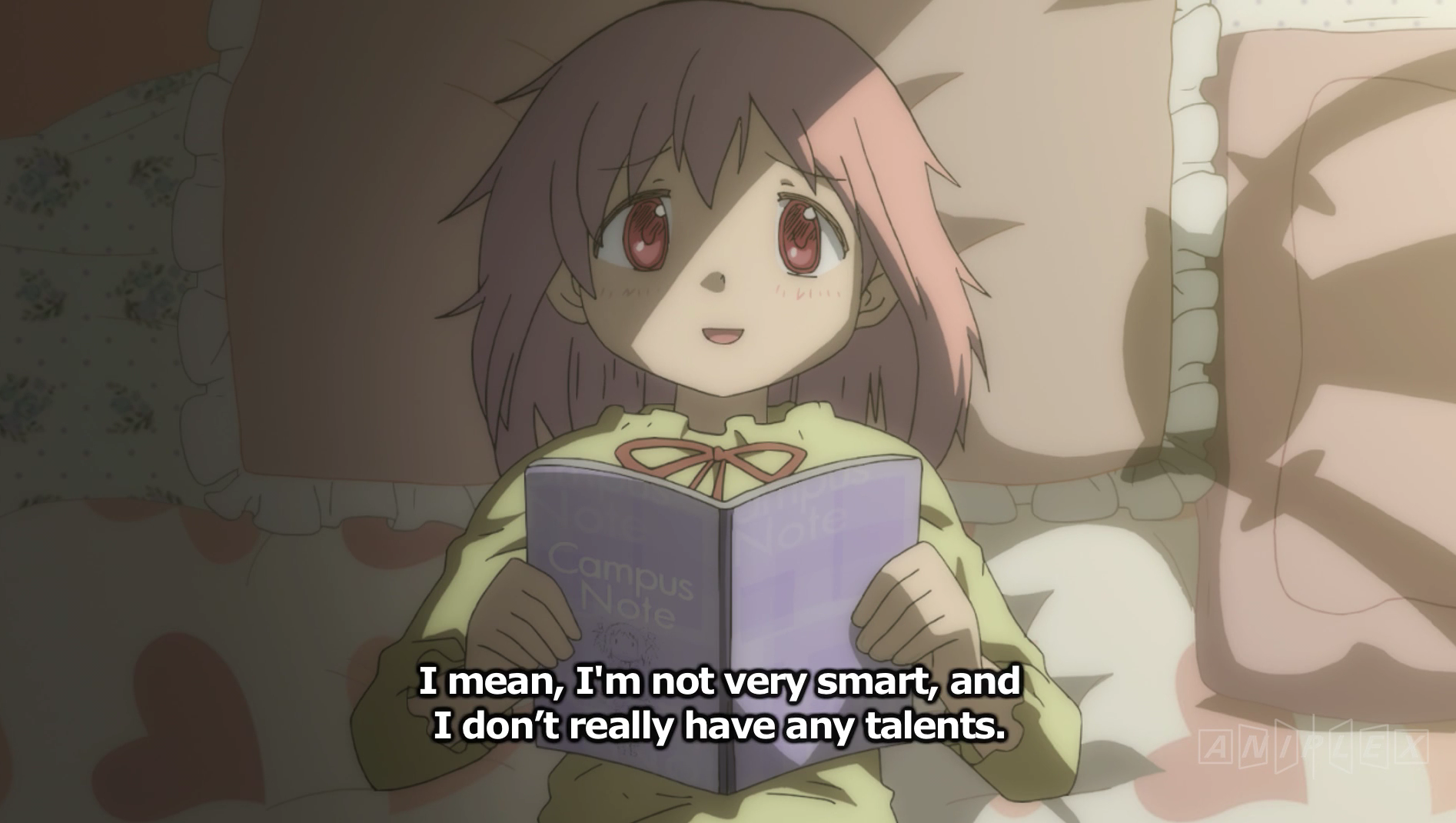 Despite not having any powers, Madoka has the greatest potential thanks to fate converging. She can become either the strongest magical girl or the strongest witch who can wish for anything. But by the end, Madoka has seen enough. Very early on, she gave. Mami some encouragement, then had to watch her die. She & # 039; s seen how Sayaka & # 039; s wish ended up corrupting her and left her cut off from one of the most important people in her life. It & # 039; s through witnessing the suffering of others that Madoka finally realizes what it is she wishes for. It isn & # 039; ta selfish wish, the way the others & # 039; had been, but a wish born out of her deeply entrenched desire to help others. ultimate wish is to help everyone else, to the point that she becomes the ultimate martyr — changing the world even at the cost of her own identity and place in it. While it may be a little difficult to see Madoka as an active protagonist, looking at the series as a whole, we can see that everything has primed her for This point. She has finally become someone who wants something, not for herself but for all the people who have suffered under the unjust system that has tormented people for ages. 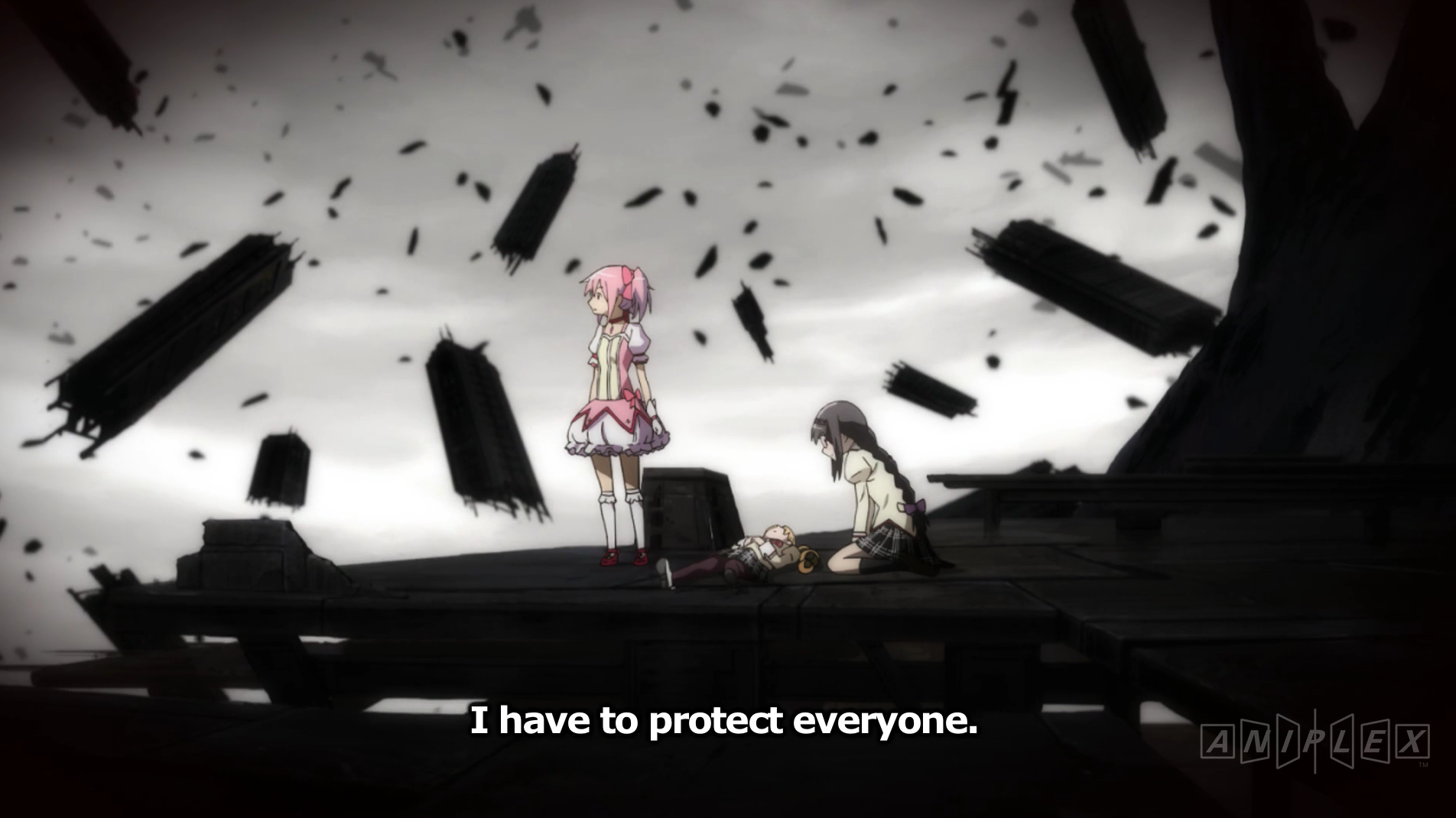 Madoka is not the character who boldly asserts themselves at the start. She never becomes the superpowered hero that fights monsters and villains. She doesn & # 039; t even start out with the desire to change the world, she grows into the role of being the world & # 039; s savior. And still, the entire series hinges on her and shapes her choice. She may not do any fighting against the witches, but she is the one that everything depends on. She is the protagonist because this is ultimately a story about her growth, the tale of how she came to be, and what brought her to the one decision that rewrote the world.

What do you think about Madoka? Let us know in the comments!

Noelle Ogawa is a contributor to Bubbleblabber And Cup of Moe. She can be found on Twitter @noelleogawa..

QUIZ: Which Berserk Character Are You?

I have yet to meet a Berserk fan who only kind of Likes the series. If you & # 039; re anything like me, you & # 039; re ravenously obsessed with any and all things related to Kentaro Miura & # 039; s dark horror fantasy. My infatuation with Berserk Not long afterward, I...

Premiering last week was the latest Pokémon music video, set to the song'Arcadia'by BUMP OF CHICKEN and directed by Rie Matsumoto ((Kyousougiga) at anime studio BONES. Since its release on September 29, the video has amassed over 10 million views, not a Joltik sized amount! English subtitles available on YouTube: While the amount of views...