Check out these titles to get into the spooky spirit in preparation for Halloween!

Synopsis: For high schooler Kei—and for at least forty-six others—immortality comes as the nastiest surprise ever. Sadly for Kei, but refreshingly for the reader, such a feat doesn’t make him a superhero. In the eyes of both the general public and governments, he’s a rare specimen who needs to be hunted down and handed over to scientists to be experimented on for life—a demi-human who must die a thousand deaths for the benefit of humanity.

Recommendation: AJIN starts off with a bang—literally! Humanity has discovered being that seem to be immortal that they name ‘demi-humans.’ Follow Kei Nagai as he discovers he’s a demi-human after surviving being brutally hit by a car, and how his life drastically changes from that moment. This series shows that the pursuit of immortality is not a pretty one, and humans can and will go to great lengths to achieve their goal. This begs the question: who’s the bigger monster, the ones who can’t stay dead, or the ones killing them over and over again? 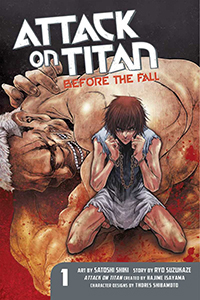 Synopsis: A prequel series to the number one bestseller in Japan. Humanity has learned to live in complacency behind its high walls, protected from the giant Titans. But when a Titan-worshipping cult opens one of the gates, a Titan wreaks havoc, consuming the cultists. After the rampage is over, two young Survey Corps members are shocked to discover a pregnant woman’s partially digested corpse – with her baby still alive inside it! What will the fate of this “child of the Titans” be? And how will humanity learn to cope with the Titan threat?

Recommendation: Can’t get enough of Attack on Titan? Dive further into the world with Attack on Titan: Before the Fall and learn a bit more about its history! This series focuses on an all new cast with an intricate art style distinct from the main series, but it still has the same elements of humanity’s potential for despair, cruelty, strength, and kindess that hook readers in the first place. Kuklo, the main character, embodies all of that and more in his very existence; found alive in a Titan’s vomit as a newborn infant isn’t an easy start, especially when that lands him in captivity with the title of “Titan’s son”—and all the hatred that comes with it. Join him on his journey to experience all the wonders and terrors life has to offer as the child of a Titan.

Synopsis: Yokai, ghosts, and humans living together in harmony? Yushi Inaba was taken in by his uncle’s family after losing his parents in an accident three years ago. Now sixteen and eager to make it on his own, he hopes to move into dorm upon entering high school. But by a cruel twist of fate, the dorm burns to the ground! After searching high and low, Yushi finally manages to find an apartment at the too-good-to-be-true price of 25,000 yen per month! Sure enough, there’s one condition: the apartment is haunted! Surrounded by a gaggle of colorful tenants, Yushi’s “normal” high school life begins! Waka Miyama delivers an elegant comic based off of the popular novel series by Hinowa Kozuki.

Recommendation: For something a little more cheerful that still has ghosts and yokai, check out Elegant Yokai Apartment Life, where the scariest thing is finding a place to live on a budget. From a pair of hands that runs the kitchen and makes the yummiest meals, to a living exorcist that chooses to live and work primarily with ghosts, to your average overworked salary men that just happen to be ghosts, the vibrant cast of characters will charm you and show you that death doesn’t mean you need to stop living your life! Just make sure to pay your rent on time. 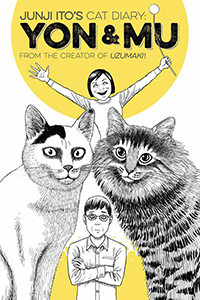 Synopsis: HELL-O-KITTY! Master of Japanese horror manga Junji Ito presents a series of hissterical tales chronicling his real-life trials and tribulations of becoming a cat owner. Junji Ito, as J-kun, has recently built a new house and has invited his financée, A-ko, to live with him. Little did he know?his blushing bride-to-be has some unexpected company in tow-Yon, a ghastly-looking family cat, and Mu, an adorable Norwegian forest cat. Despite being a dog person, J-kun finds himself purrsuaded by their odd cuteness and thus begins his comedic struggle to gain the affection of his new feline friends.

Recommendation: Join Junji Ito in these autobiographical stories as he faces one of his worst fears as a dog-lover: cats! These chapters will appeal to anyone who’s ever owned or lived with a cat. Honest to the bone about the trials and tribulations of cat ownership (or, let’s be real, servitude), he also depicts the joys and triumphs that come when a cat trusts you enough to sit in your lap. While this volume departs from his normal style and themes, there are still moments of horror in his art and story that will appeal to both long-time and new fans. 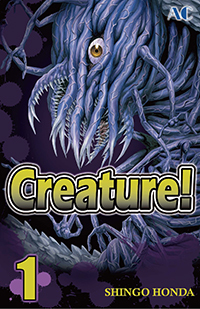 Synopsis: With the upcoming inter high basketball tournament coming up, Akira Takashiro and Eiji Kudou declared a competition: whoever scores more points in the tournament will confess to Miku Aizawa, the girl they both have had a crush since childhood. However, just as the rivalry was to be resolved, an earthquake knocks Akira out. When he wakes up, he finds hideous monsters swarming his school, leaving tons of corpses and blood on the ground…

Where is Eiji? What is happening? And why? As he moves on, shocking revelations will be unveiled, and maybe there’s something deeper that the government is hiding.

Recommendation: Creature! is a manga perfect for Halloween. It starts off like your typical shonen manga, but within the first chapter takes a sharp turn into horror. While there is a decent amount of gore with great attention to realistic anatomy, the real horror lies in what humanity is willing to do to each other to survive. However, it is not all hopeless despair, as the main characters show that even when it looks like the world is ending, you can still care about people and help others out. With an eye to details that makes the artwork even more realistic and horrifying, imperfect yet fascinating characters, and a plot line to make you paranoid about the government, Shingo Honda crafts a story that sucks you in and doesn’t let you go until a creature gets you!

Read a Preview Now
Or check it out on Kindle 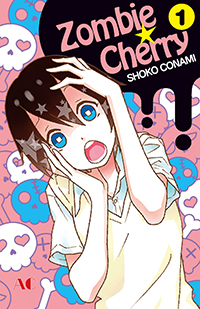 Synopsis: The romantic comedy tells the story of a girl who decides to take a large quantity of secret medicine after falling ill before an important date. Though the medicine is supposed to keep her cells fresh, she realizes that it has stopped her heart, making her into a zombie.

Recommendation: For a more light-hearted approach to Halloween, have a rom-com in manga form! Like the synopsis says, the Miu takes too much of a home-made concoction her next-door neighbor and budding mad scientist made, accidentally resulting in her death and subsequent un-dead zombie activities. Fortunately (or unfortunately depending on your viewpoint) she has just scored a date with her crush! …who happens to be terrified of anything occult, and especially zombies. Romeo and Juliet had nothing on these star-crossed lovers! 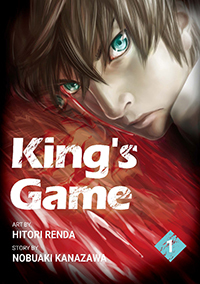 Synopsis: After awakening from a nightmare, Nobuaki Kanazawa receives a mysterious text message in the middle of the night from someone known as the “King,” concerning the so-called “King’s Game.” This message demands that his entire class participate, that the King’s orders must be fulfilled within 24 hours, and that no one is allowed to quit mid-game.

Nobuaki and the rest of his classmates shrug off the message, thinking it is nothing more than an elaborate prank. However, it soon becomes clear that failing to fulfill the King’s commands results in bloody consequences, as those who defy the King die in horrific ways. With each command more extreme than the last, the body count begins to rise, and a cloud of turmoil and despair looms over the class as they wonder if any of them can make it out alive.

Recommendation: If mind games are your thing, look no further than King’s Game! Starting off innocently enough as a fun prank, the “King” sends orders to an entire class with the threat to complete it within 24 orders or face punishment. However, the orders quickly escalate from some harmless fun to deciding which classmate is going die. By pitting classmate against classmate, trust and sanity quickly erode, pulling the reader deeper and deeper into the nightmare that is the “King’s Game”!

Or buy it now on Kindle

Zenitsu and Inosuke ’s Visuals for the Demon Slayer: Kimetsu no Yaiba Stage Play Get Unmasked

After the reveal of the live action versions of Tanjiro and Nezuko, fans of Demon Slayer: Kimetsu no Yaiba were wondering how fan favorites Zenitsu and Inosuke would look for the upcoming stage play.I think it ’s safe to say that when the characters were revealed through the official website on October 25, fans were...

23-year-old Japanese singer-songwriter Sanketsu-girl Sayuri has released a 100-second music video for her eighth single song "Koukai no Uta / About a Voyage" on her official YouTube channel.It is featured as the ED theme for the ongoing fourth season of the TV anime My Hero Academia. The self-proclaimed "2.5 dimensional parallel singer-songwriter" Sayuri won the...