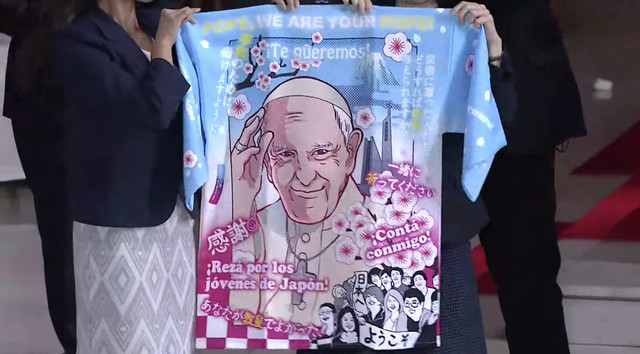 Over the past week, for the first time in 38 years, the sitting Pope, Pope Francis, has been in Japan. After visiting lower Honshu, the Pope made his way up to Tokyo and was treated like a rock star on tour in the country, with crowds of the thousands coming out to see him.

Pope Francis spent most of the trip in Hiroshima and Nagasaki spreading Anti-Nuclear weapon awareness.In a speech at Hiroshima Peace Memorial Park, he said that people in the city had “So many dreams and hopes” but “Disappeared, leaving behind only shadows and silence.”

In the above video of the Meeting with young people at the Cathedral of Holy Mary, Pope Francis was presented with a happi with his own face on it, in anime formA happi is a coat that is usually worn during festivals by people working at the festival.Happi ’s are normally made with thin materials, making them great to wear during summer. matsuri ’s while carrying mikoshi down the main area of ​​the festival in 100% humidity.

The Pope seemed more than happy to try on the happi and pose for photos in the traditional Japanese dress, that ’s mostly used in Shinto festivals …

The official website for the forthcoming TV anime adaptation of Yuumikan's fantasy light novel Itai no wa Iya nanode Bougyoryoku ni Kyokufuri Shitai to Omoimasu. (literally means I do not want a painful one, so I would like to heavily focus on defense., and its manga edition's official English title is All Points are Divided...

It ’s been over 10 years since Mamoru Hosoda’S Madhouse produced film Summer wars was first screened in Japan and over the last year, Hosoda ’s Studio chizu has been running the 10th Anniversary Project for the film titled “UPDATE.” After an exhibition earlier this year and collaborations with many Japanese companies, the newest event...

To celebrate the broadcast of the Chainsaw Man TV anime, the series will be collaborating with one of Japan's biggest karaoke vendors DAM as well as karaoke house Big Echo, which has locations all over the country. For the announcement, a new visual drawn by anime studio MAPPA of Chainsaw...