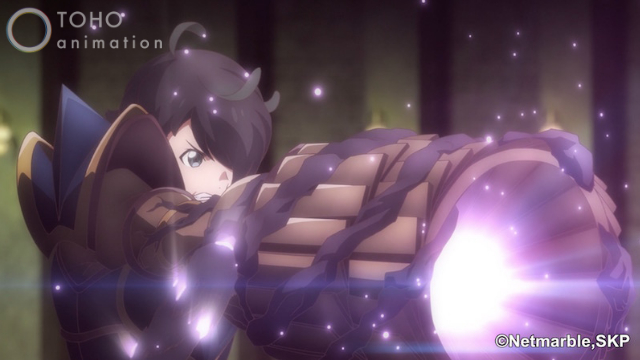 We're now nine episodes deep into the SEVEN KNIGHTS REVOLUTION: Hero Successor anime, which is based on Netmarble's mobile RPG. There's always room for another key visual, though, and the second is here to pack in as many cast members as possible.

This one was illustrated by character designer Arisa Matsuura.

Long ago, Heroes had saved this world. Many Heroes fought against the powers of Destruction and protected the world. Years in the future… The Heroes had disappeared as the years passed and those possessing their powers called Successors now have the fate of the world in Their hands. One of the elite Successors known as the Seven Knights is fighting an army of the Destruction when she saves a boy named Nemo. During the battle, Nemo awakens the powers of a Hero even he didn't know about and displays his powers But his Hero is someone who no one knew and no one ever spoke of.

Publisher Dotemu and developers Lizardcube and Guard Crush Games have revealed the third and final playable character for the upcoming Streets of Rage 4 DLC. Mr. X Nightmare is set to arrive sometime this year, and players will get to throw down with kenpo master Shiva when it drops. Check out Axel Stone's former rival...

Premium Bandai has launched a new lottery campaign to close out the month of May, and the latest entry in the Gundam Guys Generation figure line is the most visually striking one yet, featuring Quattro Bajeena from Z Gundam, complete with One Year War scars and an extra appendage to recreate his classic pose with...