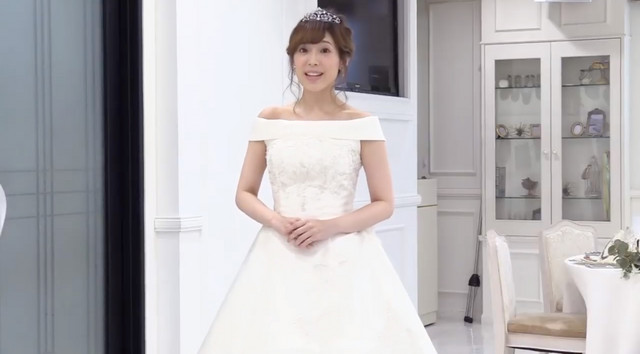 This was Eriko Nakamura in a wedding dress on a Japanese variety show, not what she wore for her wedding

On November 19, Eriko Nakamura celebrated her 38th birthday by announcing on Twitter that she “Submitted my marriage registration” and got married! She thanked fans for their support and that ’ll she ’ll continue to work hard in the future!

Here is a translation of the message in the tweet:

“Thank you for your support.
Today, Eriko Nakamura is 38 years old.
And, I just submitted my marriage registration.

I think it is of the utmost importance to let fans – who have been supporting us for so long – with my own voice as soon as possible, that ’s why I ’m using my Twitter to let you know in my own words.

I will continue to pour my heart and soul into every project I will work on, so I ’d like to ask for your continued support.

Because there is no mention of who Nakamura got married to, it can be assumed they he is n’t in the public eye.

Nakamura is most famous for voicing Haruka Amami in The Idol Master (and the subsequent franchise, including performing as Haruka in the OP and songs), Furota in Concrete revolutio, and Mikage Kiryu in the Star Blazers: Space Battleship Yamato franchise.

Voice actor agency Ken Production announced today on November 18 that 35-year-old anime voice actor Tsubasa Yonaga will restrict his activities for the time being due to dysphonia.He is currently playing Tsutomu Komano in the Chihayafuru TV anime third season and is already cast as Hibiki Kimiya in the forthcoming TV anime A Destructive God...

Despite some hiccups, calls for a boycott, and profanities aimed at the developers in the weeks leading up to release, Pokémon Sword and Shield has debuted at number one on the UK and Japanese sale charts in the games first weekend of release, dynamaxing over the hotly anticipated The Fallen Jedi, the newest game in...