How Many Cups of Tea Do They Drink In K-ON!? 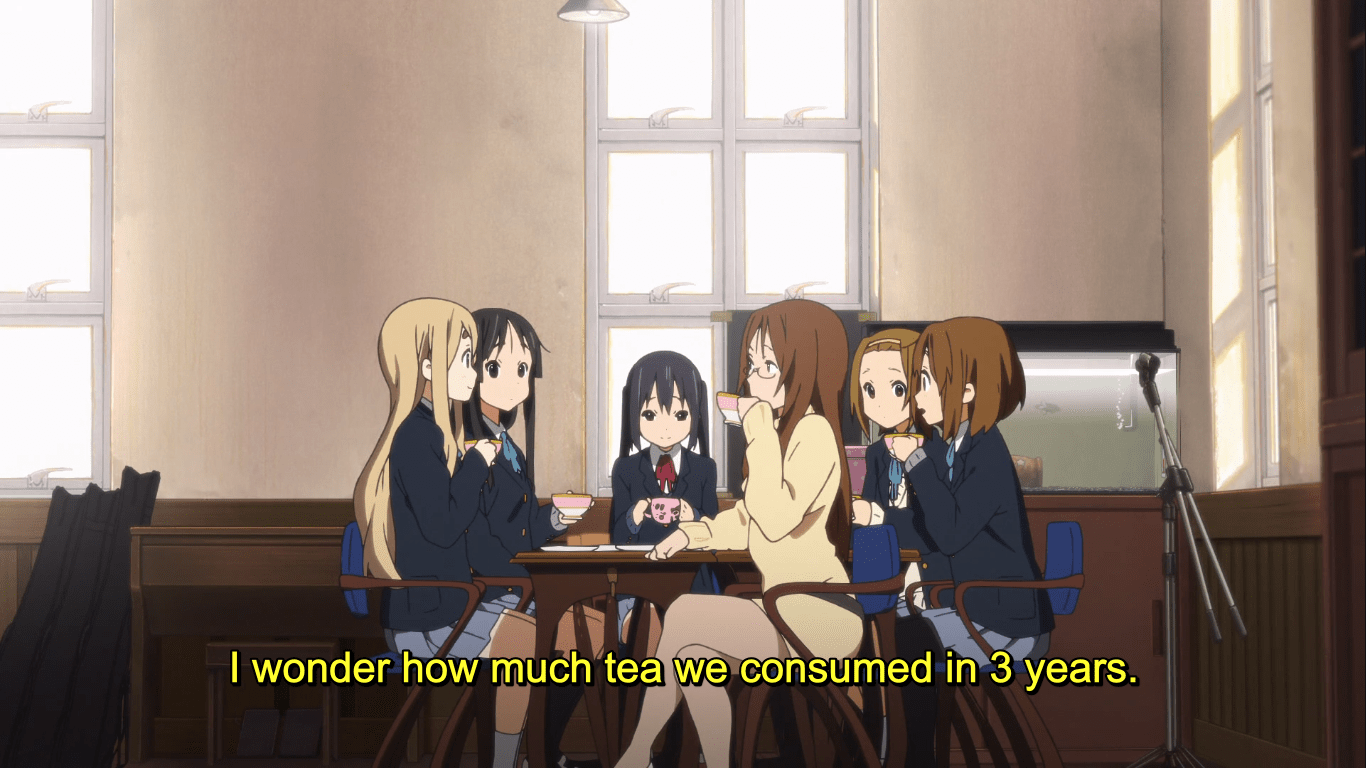 This article is part of Crunchyroll News&#039; KyoAni Month celebration.Check out the rest of our KyoAni features HERE.

Early on in K-ON! The Movie, Yui has a simple thought about how After-School Tea Time has spent its past three years of high school. She says, “I wonder how much tea we've consumed in 3 years.” Mugi thinks that they've easily drunk over 1,000 cups, which given how often they drink tea, isn't too wild of a guess. Yui's initial thought is also something I was wondering. Just how many cups of tea do they drink throughout the course of K-ON!‘S run? Through the course of figuring that out, it also led me to another realization. All of these moments of having tea together truly are the heart and soul of this show.

It’s easy to joke about how many tea scenes are scattered throughout K-ON!, but even I was shocked after seeing the final total.It makes Mugi's guess seem not at all outlandish by the time we get there.All of the times when After-School Tea Time gathers together and sometimes with others to drink tea showcase the soft and subdued nature of the show.There's serious moments, goofy moments, quiet moments, and emotional moments all baked into having a cup of tea with your friends.They're not only a great way to see how these characters interact with one another, but it gives you a chance to truly learn and understand who each character is.By the time you're done with the whole series, it's like you've been friends with these girls all along, which I think is a reason why this is not only my favorite Kyoto Animation series but one of my favorite series period. 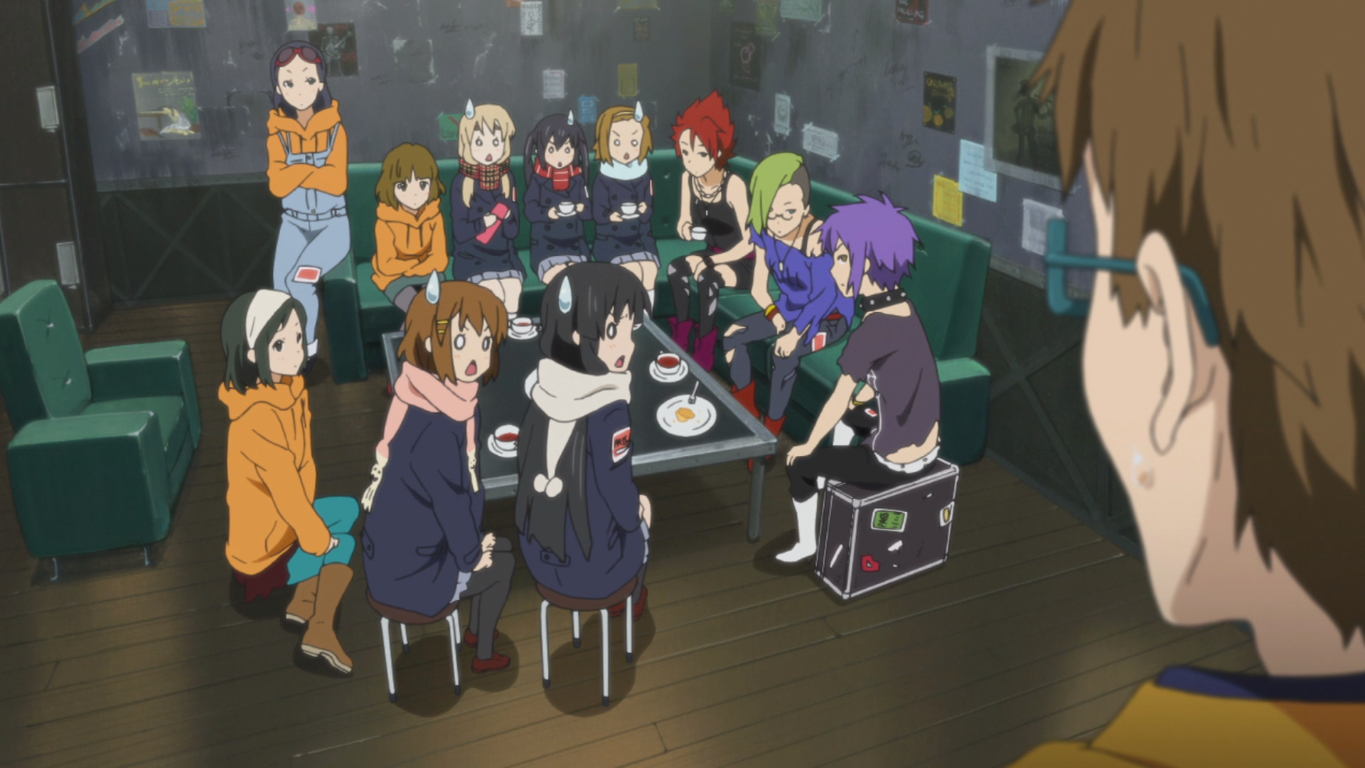 So, let's figure out just how much tea they drink throughout the first season.With only 14 episodes to its name, Season 1 is able to pack in a lot of tea to drink.Over the course of the 12 episodes and two OVAs, there's a total of 180 cups of tea drank, which averages out to about 13 cups an episode.Every episode doesn't quite reach that mark since two episodes only have three cups consumed while the OVA, “Live House!” has the most with 30 .I knew there was going to be a lot when through the first three episodes, there were 54 cups, which was startling.Still, that's a lot of time to get to know these characters early on which helps as we move through the season.

One of my favorite tea scenes in Season 1 is actually in the second OVA, “Live House!” After-School Tea Time is invited to perform their first show outside of a school event and have to get acclimated with learning how to deal with sound checks, stage lighting, and also interacting with the other bands.The girls are energetic and nervous throughout the day, but they seem to calm down once Mugi suggests they have some tea.It also allows them to have a chance to hang out with the other bands once the others smell tea and join them. 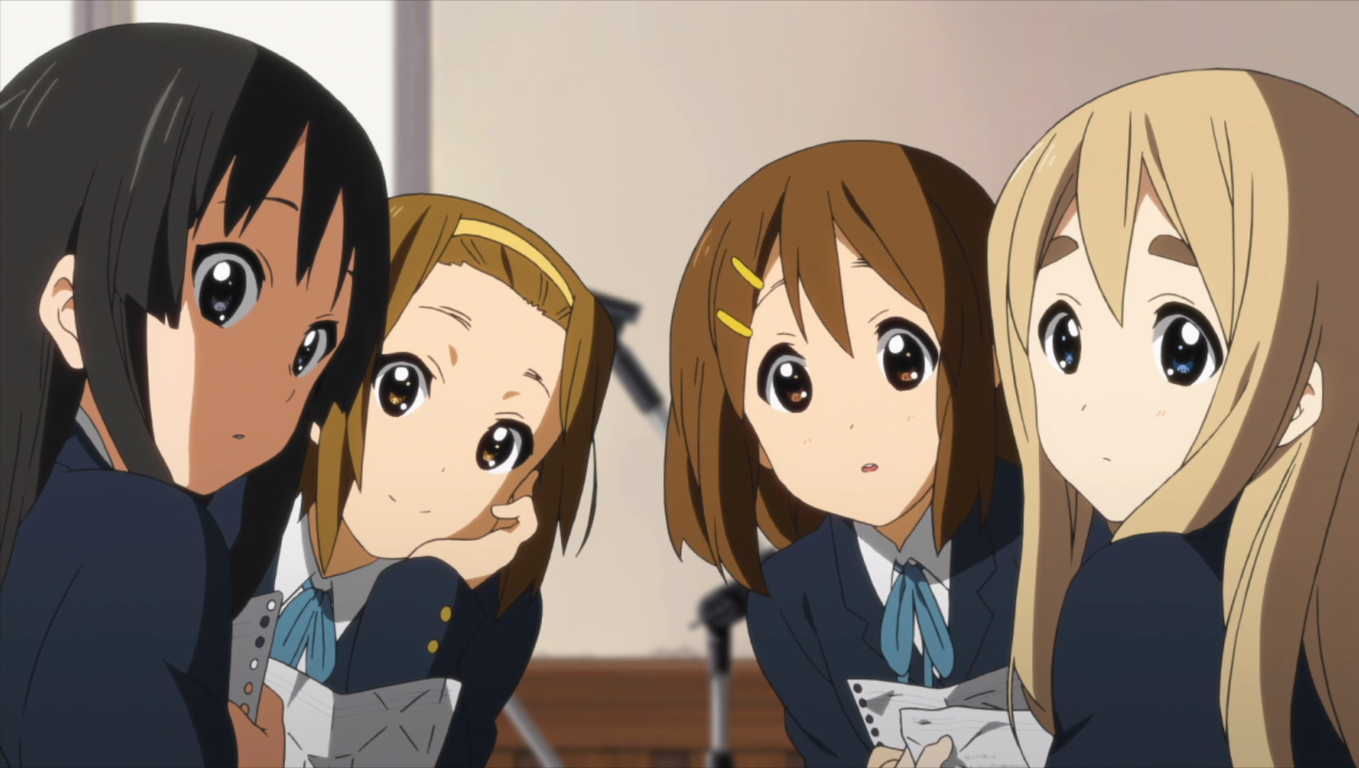 You're easily able to see how quickly their nervousness for their forthcoming performance and being around other bands washes away just by this brief moment of hanging out. They're able to learn the other groups' motivations for the future and break the ice in A way they were struggling to figure out earlier.It also lets you see again how well the dynamic of the group works.Mugi's gentleness and charm is able to invite the other groups over, Ritsu and Yui are able to use their extroverted nature to discuss goals and aspirations, and Mio is quiet which allows her to observe just how well their group is able to overcome these kinds of anxieties.This small session leads to the other bands being able to ease the anxieties of After-School Tea Time during their rehearsal , and it shows the kind of comradery that goes into small gigs such as this.

Often, we think of Kyoto Animation as a true powerhouse when it comes to exquisite animation.There are certainly moments you can point to in K-ON! that have that, but they're also so good at creating stories that emphasize slow and methodical storytelling while also capturing fantastic character moments.It's certainly something that series director Naoko Yamada excels at, which she puts to use constantly throughout all of K-ON! If you took this series and made it less about all of these small, intimate moments that the characters have, I don't know if it would be as good or enjoyable to watch through over and over again. Those moments highlight why these girls work so well together and also how the show is able to keep you engaged even in a show where at times, they only talk over tea. 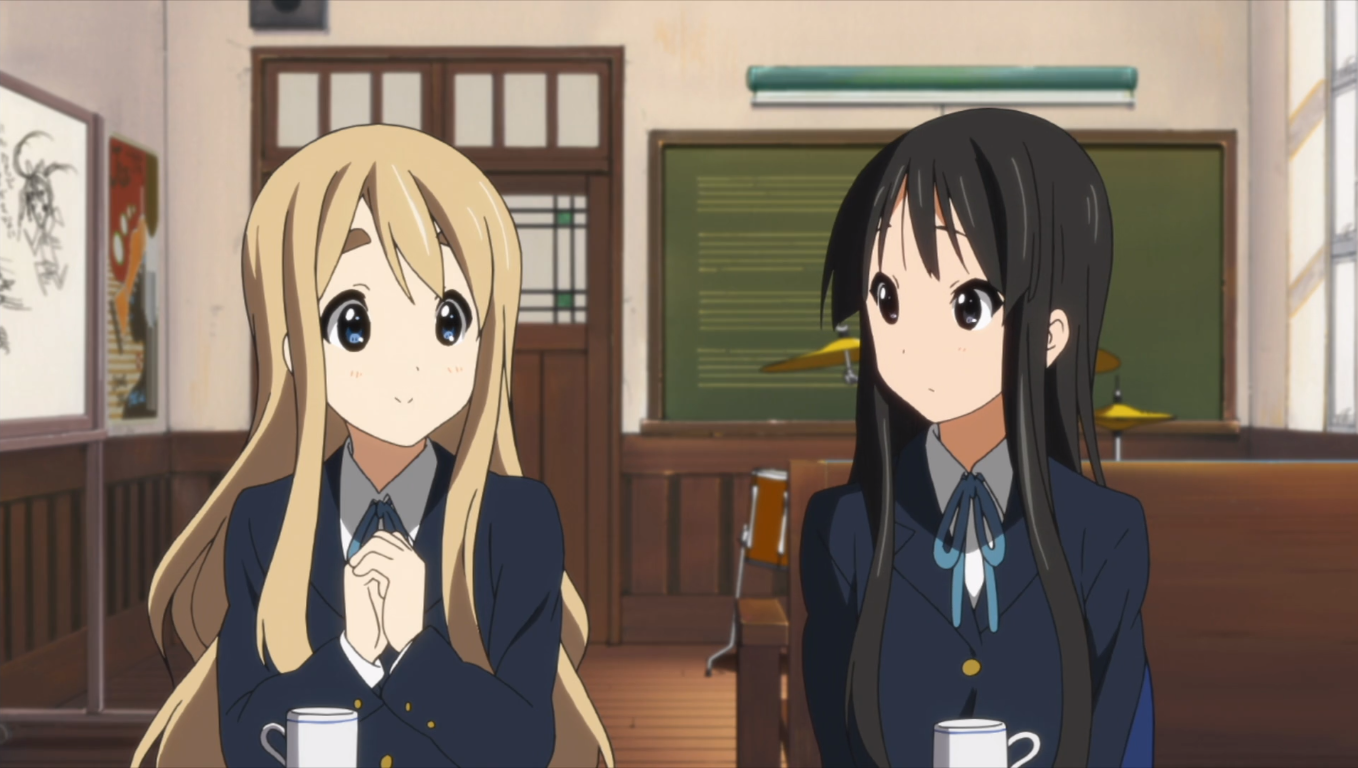 Season 2 ups the ante with more episodes and 311 instances of drinking tea, which makes amber the color of the tea they drink.That comes out to about 12 cups of tea per episode, one less than Season 1, but it makes sense given there are actually two episodes where they don't drink tea at all. It might seem sacrilegious to not drink tea in K-ON!, but it actually works in the context of those two episodes.Still, that's a whole lot of tea to drink in a season that is a single year in the timeline of the series.

There are a lot of great tea moments throughout Season 2 to choose from.It'd be hard to pick against the final time they have tea in the club room in the series finale.It's probably one of the best cases of framing an emotional moment around their daily tea since we see Azusa feeling confident about finding new members next year, but only a few short moments later, breaking down into tears because she doesn't want the other members to graduate and leave her. The lead up into all of that feels melancholic before anything even happens since you know this is the last time they'll ever have tea like this together.Even with the whole episode revolving around graduation, it truly adds a weight of finality to the episode that this is truly it. 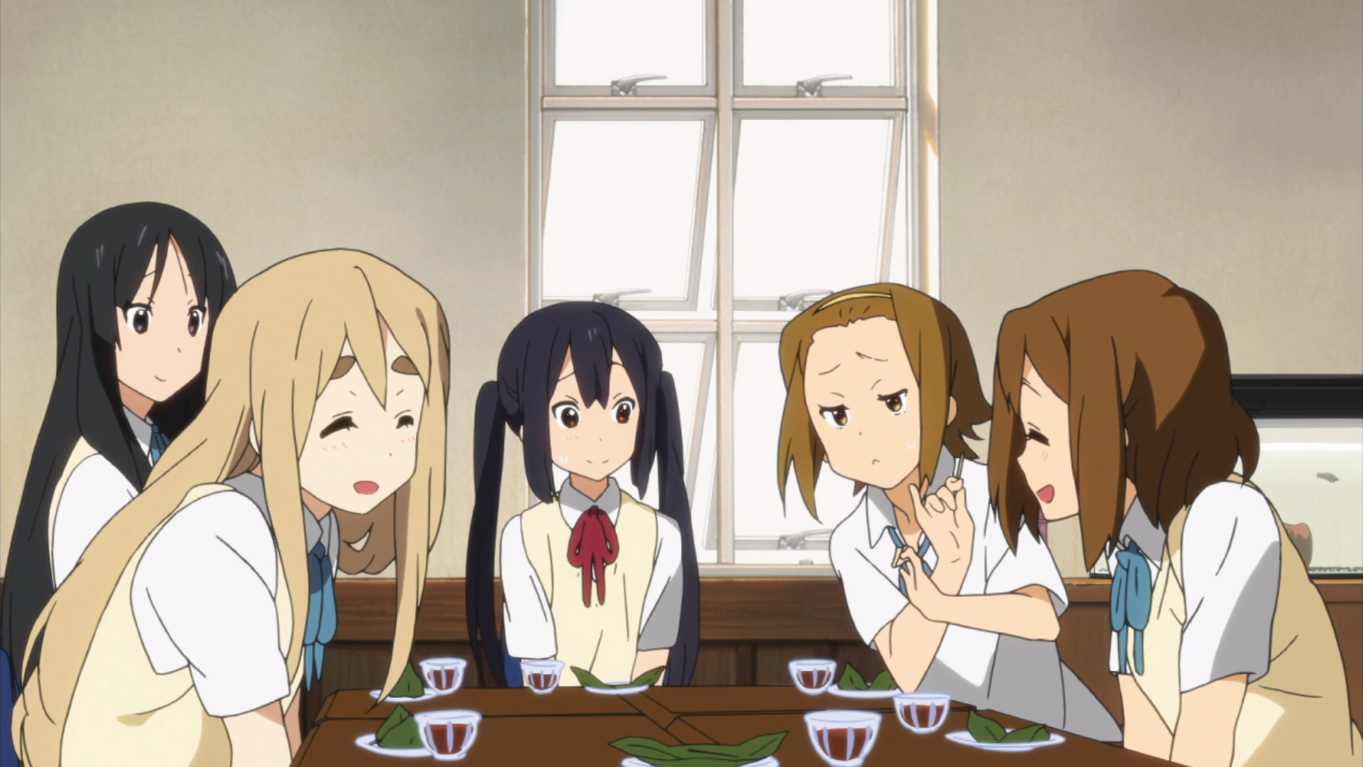 On the opposite side of the spectrum are their planning meetings for a new recruitment video in the OVA, “Planning Discussion!” This shows the comedic side of what can happen when the group gets together to drink tea when they attempt to come up with the best idea to help Azusa get more members next year.It also allows you to see some of the strange nature of the group with ideas such as Sawako's Hollywood movie trailer, Mio wanting to have Ton-chan narrate a video, Ritsu wanting to embellish her successes, Yui wanting everyone to dress up in animal costumes, and Mugi coming up with a murder mystery. Tea time for After-School Tea Time is truly the essence of youth.

Now, let's find out once and for all the grand total of tea that is consumed throughout the whole series. Will it be as much as you thought? Adding up everything together from the TV anime, the movie, and the openings and endings, we get a grand total of 544 cups of tea drank over the course of K-ON! Since we don't get to see every day of their three years of high school, I think it'd be safe to say Mugi's thought of at least 1000 cups can't be too far off.Through the use of some quick math, I've also estimated how much liquid that is.This isn't an exact measurement because it's impossible to do that with how often they're switching tea sets, but through the entire series, they roughly drank about 107 liters of tea.To put that into perspective, that's about twice as much liquid as the average car can hold in its gas tank.So, yeah, they drank A LOT of tea in K-ON! but it's also why this show is so great and continues to hold up with every repeated viewing.All of that tea gives you the quiet, fun, emotional, silly, and relaxing moments you'd come to expect from this series.It's also why this is one of Kyoto Animation's masterpieces.

Was your guess of how much tea they drink close to the actual number?What are some of your favorite tea moments in K-ON!? Let us know down in the comments below!

Jared Clemons is a writer and podcaster for Seasonal Anime Checkup Where he can be found always wanting to talk about Love Live! Sunshine!! or whatever else he&#039;s into at the moment. He can be found on Twitter @ragbag.

Two of anime's biggest troublemakers are teaming up for a series of collaboration goods… and it's actually pretty cute. Shinnosuke of Crayon Shin-chan And Rascal the Raccoon from World Masterpiece Theater The joining will, trading costumes, and generally having a good time across a variety of cute goods.The items will be sold for a limited...