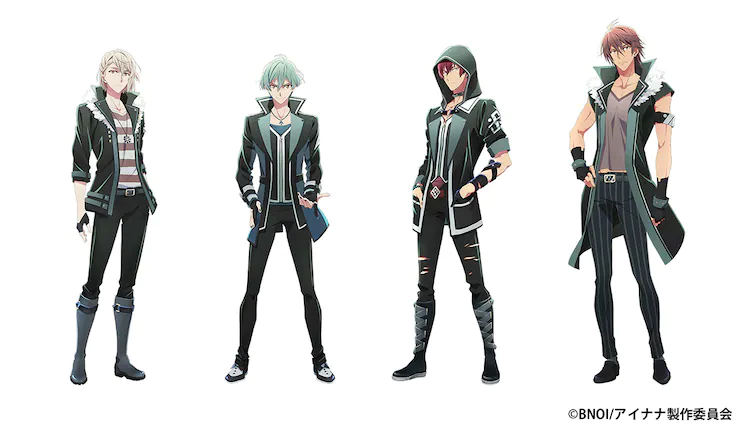 The first half of IDOLiSH7 Third BEAT! Closed out this weekend, but don't worry — a second cour is on the way!

The third season of the anime, based on the mobile game of the same name with art by Arina Tanemura, announced that it will continue in 2022. We don't have a firm date yet, but we do have cool art of idol group ŹOOĻ (seen above), featuring their stage outfits from the most recent episode.

The stars of IDOLiSH7 Will be keeping fans entertained in the meantime wiht their idol activities, including an Abema pay-per-view special looking back on the past four episodes. Voice actors KENN (Tamaki Yotsuba), Atsushi Abe (Sōgo Ōsaka), Wataru Hatano (Gaku Yaotome), Shinnosuke Tachibana (Yuki), and Yoshihisa Kawahara (Kaoru Anesagi) will team up for commentary, retrospectives, and games. The episode goes live on October 2, and will be available to purchase and view via Abema PPV until November 1..

A group of aspiring idols gather at Takanashi Productions and are entrusted with the company's future. The seven men who have just met represent a variety of totally different personalities. However, they each have their own charm and possess unknown potential as idols. Forming a group In the glorious but sometimes harsh world of idols, they aim for the top with dreams in their hearts!

Hey, space cowboys! What's old is new again, because Netflix has published the opening credits for their upcoming live-action adaptation of Cowboy Bebop, and it features some new faces as familiar characters as well as some very iconic tunes. (Yep, that's "TANK!" By Seatbelts.) Based on the 1998 anime directed by Shinichirō Watanabe and featuring...