Go Back to Shop All CategoriesAnime Otaku NewsBest Anime MoviesCategorized
HomeBlogAnime Otaku NewsREVIEW: The Intrigues of Haruhi Suzumiya Light Novel Reminds Us of the Good Times with the SOS Brigade

REVIEW: The Intrigues of Haruhi Suzumiya Light Novel Reminds Us of the Good Times with the SOS Brigade

After a nine-year break, The Intrigues of Haruhi Suzumiya light novel written by Nagaru Tanigawa, graced bookshelves of Japan and digital storefronts around the world, with a physical English release coming in June. The charming tales were hyped up to be a return of the hyperactive God and her disciples of mystery, who exist to make sure Haruhi isn't bored — make sure to read the other books in the series (or watch the anime) to see how well that works out!

Instead of an overarching story, Tanigawa compiled three short stories — two previously released exclusively in Japan, and a new one for the new novel. As a Haruhi fan for over a decade at this point, I was excited to finally feast my eyes on what mysteries awaited me, though disappointingly, they were more literary than mystery.

The first Haruhi Suzumiya story after a nine-year break is a small, charming tale of how Koizumi is salty about missing out on post-Disappearance adventures and a reminder that Tanigawa will not always give you the answer you're looking for. I didn't want to know about Koizumi's clothing sizes before, but now I have to!

To put it simply, it ’s a palette cleanser of what ’s to come in the rest of the light novel. First released as a standalone story in an art book, “Random Numbers"was placed here to remind us of Kyon ’s snark, Haruhi ’s helplessness when being alone with Kyon, and how the rest of the S.O.S. Brigade ship them together, intentionally or not — even if we fans do n’t.

The second of three stories in the book, "Seven Wonders Overtime" is a giant tease of a story that takes mysteries found in schools all over Japan and talks about adapting them to appease Haruhi so she doesn't cause any of the said mysteries to happen.

Between the two short stories, "Seven Wonders Overtime"feels the most modern. We have to remember that a majority of the Haruhi Suzumiya series was written before the iPhone existed, before HDTV was mainstream, even before the PlayStation 3 was in the hands of consumers! Being able to read about a guy being houses to another world and “plot armor” feels more modern than re-reading the older tales. I liked that.

What I didn't really like is how the story felt like Tanigawa looked up some old Japanese mysteries and, instead of writing a plot, decided to write a conversation about his Wikipedia adventures. The entire story teased Haruhi causing mayhem to find the seven wonders of North High (or make them up herself) Instead, by the end, Haruhi accepted what her SOS Brigade members came up with.

It ’s great that the characters, especially Haruhi, have grown over the 12 books, but it just does n’t make for an interesting story. 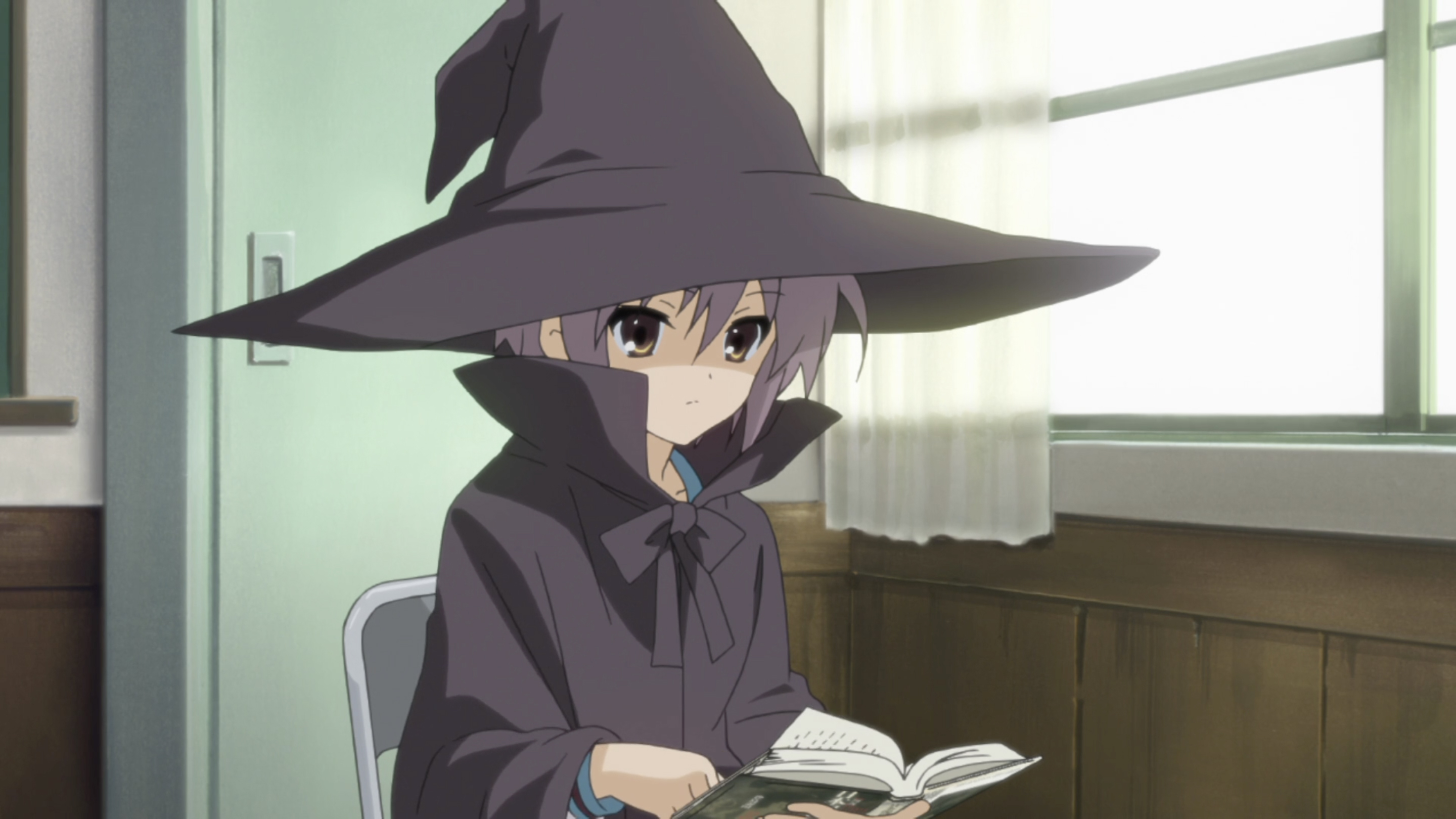 That uninteresting story leads straight into the third act of the light novel, which features the girl, now named T, who was introduced in the second act giving us some sort of thematic overtone to the entire book that boils down to: Tsuruya is rich, goes away a lot, and is quirky — though that last part was pretty obvious already to fans of the series.

“Tsuruya ’s Challenge”Is the strongest of the three stories, mainly due to its length and those“ aha! ”Moments. Tanigawa, instead of writing a plot that moves the overarching Haruhi Suzumiya Story along, spends yet another story on the Literature Club going over other, more interesting stories, this time set up by Tsuruya in the form of a three-episode mystery saga.

The biggest issue I have with “Tsuruya ’s Challenge“Is that it felt less like Tanigawa wanted to tell more Haruhi stories and more like he wanted to explain how he writes and found that using the SOS Brigade + 2 was the easiest way he knew how. Pages in the story just talk about how a narrator changes the way text is portrayed or how Tsuruya's writing style lends itself to being misinterpreted (which, funnily enough, is very much like Tanigawa's). It almost makes me want to go back through the entire story to work out places where it feels like Tanigawa could be trying to trick the reader.

That being said, when I did work out the mystery (before the SOS Brigade did, I might add) I felt very proud of myself! Like I was smarter than the girl who was supposedly God. It wasn't super subtle but it still made me feel good.

The Conclusion of Haruhi Suzumiya

What made these stories unremarkable is that there really is n’t anything to remark on. There ’s no antics, no time-traveling, and certainly no God-like powers from any Haruhi character, whether you believe it should be Haruhi, Sasaki, or another.

For those who have followed the Haruhi Suzumiya series for over a decade, like me, you ’ll love being able to follow these characters once again and enjoy their company, but if you ’re looking for something on the scale of Surprise, you ’ll be sorely disappointed.

On the flip side, Tanigawa added in the author's note, “I hope all three stories bring a look of joy to your face, whether that be a smile, smirk, or a grin.” And each one did some of that, with the third making me grin so hard, especially near the end.

There is one section of the book that does need special recognition. I expected many things going into the latest Haruhi Suzumiya novel: laughter, weird math equations, wondering who is really “God” in the series. But I didn't expect to actively cry; It wasn't from any of the prose, or even the characters, but the final note from the author Nagaru Tanigawa.

Tanigawa spoke about his memories with the staff of The Melancholy of Haruhi Suzumiya TV anime at Kyoto Animation who perished. He did n’t speak about himself much, just incidental memories that he saw while working on Haruhi Suzumiya at Kyoto Animation; such as the late Naomi Ishida (the color designer on) Haruhi) Discussing with Noizi Ito (the illustrator of the novels) about the color of Haruhi ’s shoes.

Not only does the note show how deeply the staff at Kyoani cared about their craft, but how kind and easygoing they were as human beings. To echo the words that Tanigawa wrote:

Ultimately, as life goes on and memories fade, it brings me such joy (even if I am crying), that Tanigawa had the heart to leave these memories immortalized in The Intuition of Haruhi Suzumiya..

The Intuition of Haruhi Suzumiya is available digitally in English from Yen Press.

Japanese fashion designer Yohji Yamamoto's fashion house has announced a new collaboration with celebrated Japanese horror manga master Junji Ito that turns his debut work, Tomie into a streetwear-influenced line of apparel and accessories. The line will be launched under Yohji Yamamoto's S'YTE online fashion sublabel for limited releases at mid-range pricing and will feature...

Re: Zero Ties Up with Japan's Pacific Baseball League For New Merch Line

Following up on the news that Re: Zero will return soon, the franchise will also collaborate with Japan's Pacific Baseball League to promote the league's baseball teams and sell exclusively branded merechandise via Kadokawa Store. The previews can be found below: Emilia will wear Saitama Seibu Lions colors, Lamb will wear Tohoku Rakuten Golden Eagles...