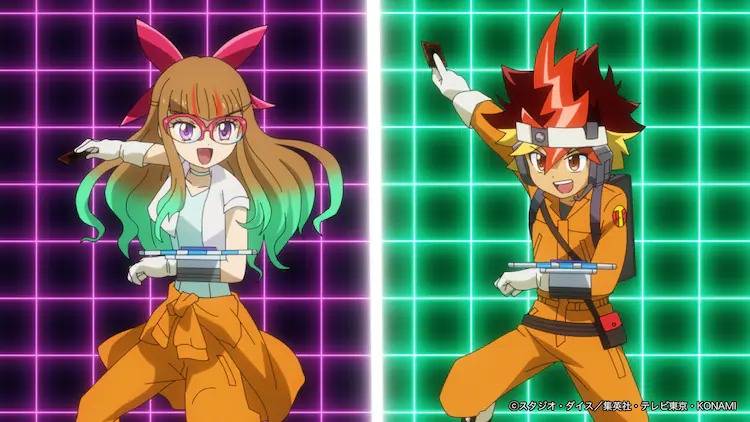 We've had card games on motorcycles, we've had card cards with dice, and even card games in school, but now the games head to space, with aliens coming down to Earth to get their card games fix in the eighth series of Yu-Gi-Oh!, titled Yu-Gi-Oh! GO RUSH!! Ahead of the series' broadcast next month, it was announced that Japanese cosplay superstar Enako will be joining the cast, as well as revealing the premiere date and opening and ending theme songs and their performers.

Enako will be voicing the magical sheep monster girl Meegu-chan in her first full-length role in an anime after only doing bit parts here and there.

Yu-Gi-Oh! GO RUSH!! takes place in Rokuyo-cho, the birthplace of the Rush Duel. One day, Yuhi Oudou and Yuamu Oudou, two elementary school siblings who run a UTS (Uchuzin Trouble Soudansho / Alien Trouble Consultation Office) to get rid of annoying aliens, discover a spaceship, and when they step into it, they find an alien named Yudias Belgyar (This spelling may not be correct), who comes from the faraway Belgyar Cluster. He has come to Earth in search of the Rush Duel, which is said to lead his friends to a new future after they were forced to leave their home planet, but he has no idea what the Rush Duel is. Yuhi decides to give him a hand and challenges Yudias to a duel.

Nobuhiro Kondo returns from Yu-Gi-Oh! SEVENS to direct Yu-Gi-Oh! GO RUSH!! at anime studio Bridge, with Naoto Hashimoto as the assistant director and Toshimitsu Takeuchi writing the series composition. The new series begins on TV Tokyo on April 3 at 7:30 AM.

It's been a little while since we've checked in with how JUJUTSU KAISEN 0 is doing in Japanese theaters, but the popular film continues to be popular against a very weak Japanese box office at this time of the year. Mantan Web reported today that the prequel anime film has exceeded 12.30 billion yen at the...