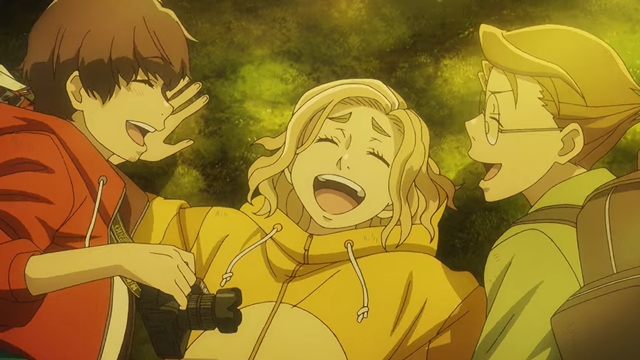 The official website for the Atsuko Ishizuka (A Place Further than the Universe)-directed original anime feature film Goodbye, DonGlees has posted a 100-second full trailer featuring its theme song “Rock The World” provided by the four-member Japanese rock band ［Alexandros］.

This trailer depicts Roma Kamogawa (CV: Natsuki Hanae) who lives in a rural town in the Kanto area, and his best friend Hokuto “Toto” Mitarai (Yuki Kaji) who is returning home from Tokyo, meeting Shizuku “Drop” Sakuma (Ayumu Murase), a mysterious boy from Iceland, and going on an adventurous journey.

The film is set to be released in Japan on February 18, 2022. Its world premiere screening was already held at the 34th Tokyo International Film Festival on November 5, 2021.

A young boy named Roma lives in a rural town a short distance from Tokyo. He can’t seem to fit in with his surroundings. He and Toto, who is also an outsider, form their own team called “Don Glees.” The relationship is supposed to remain the same even after Toto goes off to high school in Tokyo and they are separated.

“Hey, don’t you want to look down on the world?” The summer vacation of the first year of high school. It started with a casual comment from Drop, a new member of “DonGlees.” As a result of Drop’s words, Roma and the other two who are framed for the forest fire are forced to search for the drone that disappeared into the sky in search of proof of their innocence. The small adventure in the summer soon turns into a big adventure that will drastically change the way of the boys’ life.

The Going back in time in Pokémon Legends: Arceus means meeting Pokémon before they "evolved" into how we know them today, and though we've already gotten to meet some Pokémon that have adapted to the cold environment of Hisui, today Pokémon revealed a brand new Hisuian Form for the much-loved classic'Mon, Voltorb! The The Voltorb...