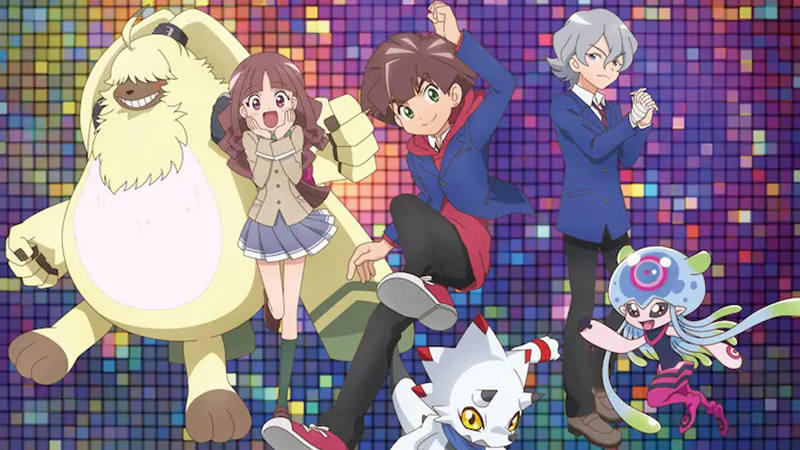 What do you do when you're a kid in a world haunted by digital monsters? Frankly — disco.

The song, titled "Monster Disco," is written and performed by Shikao Suga. The composer and musician has performed themes for xxxHOLIC, Honey and Clover II, Tegami Bachi: Letter Bee Reverse, and others. He's also composed music for acts like Smap and Sayaka Yamamoto, and director Makoto Shinkai showed his admiration for the artist by giving a character his surname in Weathering with You.

Teaming up with Suga to arrange the theme is singer/songwriter Hyadain, who rose to popularity on Niconico. With the release of the opening to Nichijou – My Ordinary Life, it was revealed that "Hyadain" was a pseudonym for producer/composer Kenichi Maeyamada. His work can be heard in themes from One Piece, Rent-a-Girlfriend, One-Punch Man, and lots of others.

Fuji TV producer Matsuki Ehana says that while you can imagine the Digimon dancing happily to the song, it's also "slightly mysterious," making it a good for for the creepy-cute Digimon installment.

Episode 32 of Digimon Ghost Game, which will be the first to feature "Monster Disco" as its ending, airs July 3.

Kara Dennison is the book reviewer for Sci-Fi Magazine and a regular features writer for Otaku USA Magazine. Follow her on Twitter @RubyCosmos, and read more at KaraDennison.com.

A sixth trailer debuted for GrimGrimoire OnceMore, which updates Vanillaware's 2007 strategy game on PlayStation 4 and Switch. This one is all about the game's Necromancy magic, which is one of four magic classes available to use in the adventure.   RELATED: GrimGrimoire OnceMore Trailer Sets Up the Strategy RPG's Story   See a...

For those of you that were waiting to watch the Uzumaki anime adaptation being produced by Adult Swim this October, It is my solemn duty to report that the official social media account for the adaptation has announced yet another delay for the series. The confirmation follows below, along with a transcription of its...